It’s FRIDAY! It has been a busy week! Jackson’s sitter had some personal issues so didn’t have Jackson this week, and it was tough getting schoolwork done and making progress with my health and wellness business.

I’ve been taking the business slow since I knew school was starting soon, but now I’m really just anxious to be more productive with it on my own. I have a few people starting this next challenge group with me, but I want to run my own. I think over the next month, I’m going to work on getting everything ready to run my own. Hopefully I’ll be into the swing of things by then and it’ll be much more manageable. I’m really loving connecting with other like-minded women and am so excited for the time when I can dedicate more time to the business. Also, the UK launch party is in London the day that Jon and I were planning to fly back from Budapest in October and I think I may be able to swing it to go to the UK launch! I’m really hoping I can make it work because I would love to meet my upline coach and to meet the future UK coaches!

I’m feeling frustrated with my master’s program since most of my assignments are dependent upon discussions with my preceptor. Since I’m not back in Atlanta yet, I haven’t had any discussions with my preceptor yet and it’s halting my assignments. I totally understand that my preceptor is busy with the department and answering my email is not a top priority, but I’m still stressed because I have papers to start on and I can’t until I get information on our departmental budget.

Anyway, back to the week though! I’ve been trying to work in my schoolwork during nap times and in the evenings. We had mornings at the gym (because I need nap time for school!) so that Jackson could get out of the house. He’s been teething and I think he had a bit of a cold, so our afternoons have been pretty miserable. Lots of snuggling and not much of anything productive.

Laura came in town from Atlanta on Wednesday night, so she was here yesterday morning. We went to the Children’s Museum and then hung out at the house while Jackson napped in the afternoon. Laura left around 3:30 yesterday to meet up with her friend who was flying into Charleston, so I had a low-key afternoon.

That is really all that has happened this week! Being back in school has put a damper on doing anything exciting and it’s been stressful trying to juggle school with being a full time mom for the week.

We have a boring weekend ahead. Jon is going to be gone for a funeral all day tomorrow, so it’ll just be Jackson and me all day long. I’m hoping we can head to the beach on Sunday morning and then I can spend the afternoon doing school work. I wish this wasn’t how the last weekend as a family in Charleston was going, but I’m grateful to have my entire family happy, healthy, and alive, so I can’t complain too much.

I’m really hoping to start on Iceland recaps soon! I’ve been so overwhelmed with the amount of stuff I have to do on the computer and I am still not done with Jon’s Father’s Day album! Ugh! I could spend days on this dang computer and not be caught up on everything!

Alrighty, last of all, I’m not doing a real Friday Favorites because I rarely try anything new, but I had two major finds this week that I was SUPER excited about! If anybody is friends with me on Facebook, you already know about my excitement.

I found pants that fit without being altered! Betabrand are YOGA dress pants! They are awesome! They’re so comfortable and they definitely fit the bill for dress casual! I wish I had found these pants before spending all of that money altering my other dress pants! I bought an XS petite short and they fit great, and I’m 5′ and 100lbs, in case anybody needs a reference. I also found that tons of working moms knew about these pants, but I live in scrubs for work and it has been years since I’ve needed to buy new dress pants. I have one power suit to wear for interviews, and that was what I wore to the two interviews I have been to in the last seven years! Other than that, scrubs FTW! 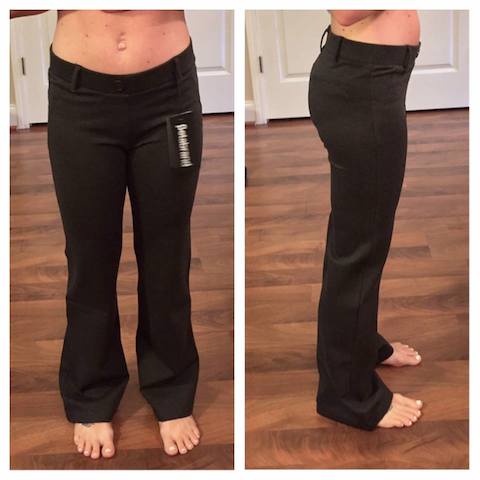 I also found these Audrey Brooke Winny shoes that I LOVE! My right foot is closer to a size 7 and my left foot is closer to a 6.5, so flats never work because my feet are such different sizes. These are so comfortable and they fit both feet! They run big (these are a 6) for sure, but I am just so glad I found flats that work! I was in serious need of some new ones for my internship. I’ve seriously been wearing the same pair of Target flats for almost ten years now and they are ragged. The other pair of flats that I wear are dirty leopard prints flats (also from Target) that Crista was going to throw out and I snagged them. They’re so comfortable because she already wore them in, but they’re in rough shape too! I have a nicer pair, but they’re so uncomfortable and I hate them! They also have a big button on them and I feel like they look too childish to be wearing for business casual. 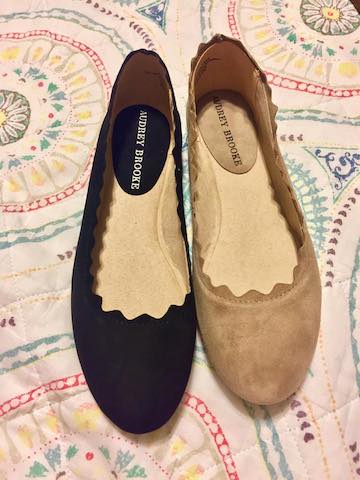