I recently went on a road trip with Gina to Philadelphia, Vermont, and Richmond. We were booking it all last minute and playing it by ear since we both had some personal things going on and didn’t want to pay for anything in advance, just in case.

The morning we left, we got a late start since my sitter’s kids were sick and we were waiting to see if they were better that morning (Jackson had gotten them sick the week before, before I knew he was sick). I had also totally saved all of my packing for the last minute, so we had a ton to do the morning we left! But by 10:10, we were on the road to Philly!

We booked our AirBnB in the car that day, but we got pretty lucky and got a cheap place with parking in Northern Liberties.

I wish I could say we did a lot of sightseeing that day, but we didn’t have time. We did stop for coffee about 45 times, which caused us to stop and use the bathroom about 95 times. Since we got such a late start, we ended up avoiding DC rush hour by going up through Delaware. We thought it’d be a pretty drive, but there was nothing at all! We even ended up eating Wendy’s for dinner out of desperation!

We ended up arriving in Philly around 11:30pm. I slept pretty terribly since the AirBnB room we booked was a large, cold basement room and I just don’t sleep well in huge, open spaces like that.

We got up early on Friday morning so we could explore Philly all day. We walked over to Café La Maude for breakfast and y’all, it was hot. We both thought Philly would be much nicer than Charleston and Atlanta since it’s farther north, but no. We were dying and it was like, 8am. We beat the crowd to Café La Maude though and got to enjoy a nice window table. Gina and I split our meals and they were delicious. I had a Croque Madame and Gina had an omelet.

After that, we decided to walk down the oldest residential street in the US, Elfreth’s Alley. It was so cute! It’s so crazy that people live in those houses too!

We decided to go check out the Liberty Bell after that since Jessica, my old travel nurse buddy, was coming to meet up with us for the afternoon and she lived in Philly, so we knew she wouldn’t be interested in that! The Liberty Bell was way less impressive than I would have imagined (along the lines of Plymouth Rock, if anybody has seen that). But we loved that whole Old City neighborhood! We met up with Jessica right next to the Liberty Bell at La Colombe. The coffee was decent, but not my favorite.

It was so good to see Jessica! I haven’t seen her since the summer of 2015, and that was just for a dinner when she drove through Atlanta. And she was like our own personal tour guide through Philly!

We decided to walk over to the Reading Terminal Market since Gina really wanted to see it. We got a cinnamon roll and one of the places in there, but it was pretty packed so we weren’t in there long. We left and explored Center City and got some bubble tea in China Town, and then decided to Uber it out to the Philly Magic Gardens. The Magic Gardens were crazy. This guy just started making the whole garden and then the city wanted to tear it down, but they decided to protect the area.

Jessica had to leave shortly after that, so we Ubered back to her car and then she took us on a little tour of downtown before dropping us off at the Museum of Art. I knew the Spring Garden Street Bridge nearby that had a good view of Philly, but even just climbing the steps at the museum provided a good view. We weren’t at the museum long (really just long enough to use their bathroom) before heading out to walk to the bridge. 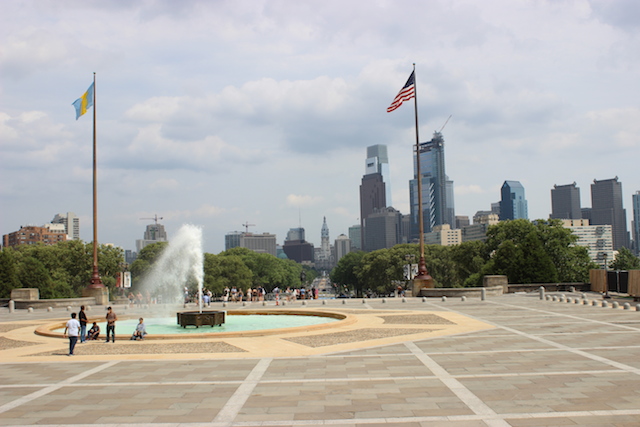 The Spring Garden Street Bridge actually was a cool view, but the bridge itself wasn’t very exciting so it was quick. Gina really wanted a Philly cheesesteak in Philly, so we headed over to John’s Roast Pork. We were told from everybody that this is the “real” local cheesesteak place to go to. I ate part of Gina’s cheesesteak but the meat was too stringy and I’m picky, so I wasn’t a fan, but Gina said it was the best she’s ever had.

We had been waiting all day for it to cool off so we could walk the Ben Franklin Bridge. I’m a sucker for city views, so I’m the one who really wanted to do this. It was actually a pretty cool walk though. You walk above the road and it just felt kind of scary! We walked halfway and then decided to go check out a rooftop bar and head back to our AirBnB for an early night in bed.

I can’t even remember what rooftop bar we went to, but it wasn’t anything worth mentioning. The view was neat, but you had to order your drinks at an indoor bar (think like, a wedding reception bar with a limited selection) and then just go stand outside trying to get a spot near the side. We also looked like hot messes after walking around all day and everybody else looked fancy. We really just listened to these people who were presumably on their first date get to know each other.

We headed back to our AirBnB, took showers, and packed to leave the next morning.

Our last stop in Philly was on Saturday morning at Honey’s Sit N Eat. Our breakfasts were pretty good and I had a really good latte, so that’s a win in my book.

After that, we finally headed out to Vermont!

4 thoughts on “24 Hours in Philadelphia”